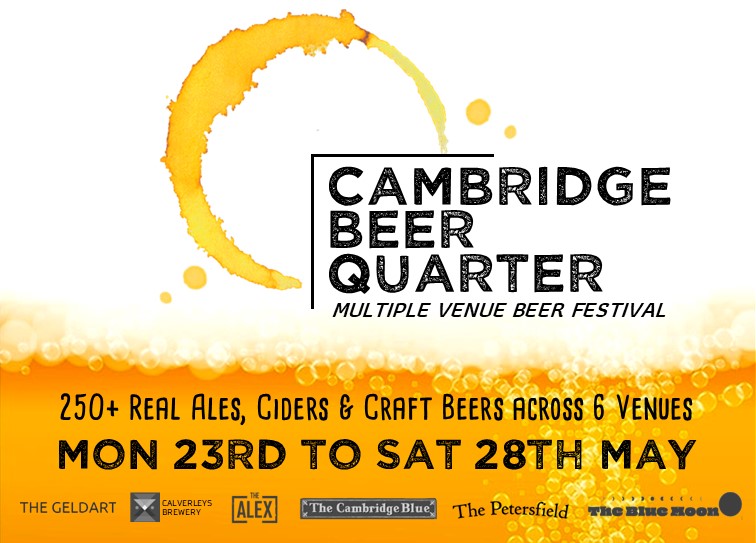 The Geldart, Calverley’s Brewery Tap, the Alexandra Arms, the Cambridge Blue, the Petersfield and the Blue Moon will turn their part of Cambridge into a beer and cider mecca in May when they run a coordinated beer festival offering drinkers from Cambridge and beyond over 250 real ales, ciders and craft beers. They will also be raising money on behalf of the six charities nominated by the six venues. Event beer glasses, sponsored by Gearset, are available at £2 each from the venues with the proceeds going to the six charities.

The Geldart will have 30+ cask ales over the week plus a cider & perry stall, run by Simon’s Cider, in the garden from Tuesday to Saturday. Cider tasting session on Wednesday evening. Barbecue in the garden on Saturday from noon. Regular menu Wednesday-Saturday, 6-10. Opening times from 3 Tuesday to Friday and from noon on Saturday. 10p from each pint will go toward the event’s charities.

The Alexandra Arms have an additional stillage of casks in the back room. Meet the Brewer night on Monday 6-8 with Buntingford Brewery. Win tickets for a brewery tour. Thursday evening is Open Mic acoustic music night in the Garden Room. On Saturday from 2-6 Cambridge 105 will be broadcasting from the Garden Room. All week they are running a raffle to raise money for charities.

The Blue Moon are doing collaboration brews with some local breweries and will have the beers available. The collaboration beers with Wylde Sky, Pastore, Three Blind Mice and Calverley’s will be keg beers. The collaboration beer with Nene Valley Brewery will be a cask beer. On Monday 7:30-10:30 Coda Sessions – Groove Attack. On Tuesday 7-11 Cambridge Electronic Open Mic. On Wednesday 7-9 Pub Quiz. On Friday 7:30-10:30 live music from Jenem plus support. On Saturday 5:30-9:30 Don’tfeedthepigeons DJ. On Sunday, 7:30-10:30 live music from Flight Mode plus support.

Calverley’s will be open from Monday to Saturday, 5-11. They have brewed some new beers for the week and are offering complimentary food pairings from 5-9.

The Petersfield will have 30 beers with 6 racks in the garden. Adnams Tap Takeover on Monday. Meet the Brewer night on Tuesday, 4-6 with Tom from Barsham Brewery. On Wednesday from 12-4 there will be a BBQ in the garden as well as their usual menu. On Thursday, 4-6, Meet the Brewer with Vanesa from the Cambridge Brew House. Friday, 8-10, live music in the main bar.

The Cambridge Blue will have an even more extensive range of beers and ciders with an additional bar in the marquee.